In this day and age, we interact with so many inventions that have transformed our daily lives without even thinking about it. Few of us stop to consider “Who came up with this idea? How did they create it? What did this look like long ago?” Such is the history of air conditioning. Life radically changed once it became popular. You could argue its importance rivals even that of the automobile! If you want to explore a brief history of air conditioning, keep reading.

First, the earliest forms of air conditioning can be seen in ancient Egypt and during the Han Dynasty in ancient China. However, modern air conditioning wasn’t invented until 1902 by Willis Carrier. He developed the idea in order to help control the humidity in the printing plant where he worked. Eventually, he created a machine that sent air through water-cooled coils. After some experimentation, he reduced the size of his machine and publicly debuted it in 1925 at the Rivoli Theater in Times Square. Initially, only theaters had air conditioners. So, on hot summer days, people would cram into theaters to cool off and enjoy the latest entertainment, beginning the phenomenon of the “summer blockbuster.”

Nowadays, nearly every modern home comes equipped with some form of air conditioning. But it wasn’t always this way. The first window-style A/C unit wasn’t invented until 1931, and cost the equivalent of anywhere between $120,000 and $600,000 in today’s currency. The first home with some semblance of centralized air conditioning was that of David St. Pierre DuBose, in 1933. It wasn’t until after World War II, when mass production on low-cost A/C units began, that air conditioning became widely available to the public. This likely coincides with the suburbanization developing throughout the country, and the growing of the middle-class at this time.

Third, what the future holds for the HVAC industry is anyone’s guess. However, just as it began as a luxury item that eventually became popular, so this seems to be where the immediate future is headed. Thermostats connected to wifi and controlled remotely through your phone were once only affordable to the wealthy. But now, this feature grows amongst people of all economic backgrounds.

Furthermore, as society becomes more and more environmentally-conscious, inventing units that use less energy is also becoming more popular. Some say, for example, magnetic air conditioners will pave the way in the future.

If you’d like more information on the history of air conditioning, or need your unit installed, repaired, or replaced, contact us at Kinkaid! We’ve been in business since 1917, almost as long as air conditioning itself! Let us be your go-to business for everything HVAC. 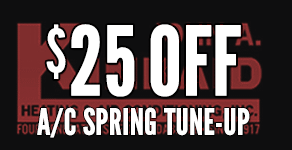